“Love is Light, that enlightens those who give and receive it.”

My third album "Up Close" is complete.

It all happened from the month of August through to December 2019 while sweating from the humidity of the northern pacific summer in my small studio here in Sapporo, Japan to freezing at the beginning of the Hokkaido winter.  My intention was to make an honest album of written words and music that would come together to reflect the foolishness and raw truths that make me who I am. A collaboration of memories and the calmness of retrospect in a world where people rarely have the time or inclination to ponder on what makes them who they really are.

The process of creating this music was therapeutic and gave me hope and a feeling of replenishment.  A new chapter will now blossom out.

If you would like any further information about me or my music, send a note by following the link below.

The bed where you once laid

I sleep but feel the sorrow

The stove where you used to bake

I eat but it’s hard to swallow

The garden you once grew

Is dead dry and betrayed

The books that you used to read

Still sit on the shelves you made

When David SweetLow puts pen to paper and then sets those words to music, those emotions captured in phrases become even more poignant. Most of us keep our deepest thoughts buried in our memories, but David will drag them up from the depths and remind us of our failures and weaknesses that we all gather as we go through life. He will remember small details from his life and write about them in sometimes the most grueling way in a reverie of truth, poetry, and fantasy.

If you like your singer-songwriters to be honest and faithful to their art, then David SweetLow is the man for you. David SweetLow makes music that floats on the air, where his words wander and probe the memory of a life lived to the full. His songs are both solemn and dark, but with a beauty that only maturity of mind can bring.

“I’ve always thought that music, language, and memory transcend modernity or any kind of time limit,” says David. “I don’t see myself in any fixed period neither past present or future. Through my relationship with music and language, I grow closer to who I really am.” That closeness with his own self is reflected in the eleven new songs on his third album "UpClose"

The story started way back in a small seaside town in Essex, England, where David learned his craft playing guitar with local Rock ’n’ Roll bands to crowds with menacing faces, bar fights, and Teddy Boys. Even then, he was more drawn to the likes of Van Morison, Joni Mitchel, and James Taylor. “I used to sneak into the local folk club and listen to Bob Dylan amid the hippies and the cannabis smoke. At least they were not trying to kill each other.” “I never wanted to be a Rock ’n’ Roller, but I was able to play a few Chuck Berry licks and that got me into my first band “Tonight”, which turned out to be a great, but short-lived, success.

After “Tonight” broke up, SweetLow was 25 years old and on the dole.  He formed, along with singer Chris Turner from “Tonight”, the band that went on to become “Yen”, where he started to cut his teeth as a songwriter and producer. “The producer-programmer job came through a tragedy,” says David.” “When we formed “Yen” there were five of us. Tony Davis was the guy in the band who did all the tech stuff of which at that time I had no idea. Tragically Tony had an asthma attack on a trip to London and later died at the age of 21. I took over his role as programmer learning as I went along. This, however, gave me a base of knowledge to be able to go on to become a recording engineer and record my own music later in life.”

The highlights of “Yen” were to be signed to a couple of major record labels and work with the likes of producer Alan Tarney, engineer/producer Gary Langan, and to tour and write with Gary Numan. After a ten year period of success and failure, David found himself back to square one and on the dole once again.

Disillusioned with the music business in the U.K. David decided to take stock of his life and moved to Barcelona, Spain. There, he soon teamed up with record producer Jordi Cubino and had a string of commercially successful pop songs. “At that time I just wanted to make money and try to make a living out of music, so we did whatever it took. We made music for beer and soft drink companies and whoever was willing to pay us."

There were many steps along the way, but eventually growing tired of making mindless pop music and commercial jingles, David returned to his routes and began writing songs on his acoustic guitar.  Incidents and memories bled down onto paper as words and then took the form of songs. Driven by a passion for songwriting and to do something worthwhile with all the knowledge he’d accumulated over time, David started performing as a solo singer-songwriter at an age when most musicians would quietly hang up their guitars and ponder back on their careers.

Cutting ahead to the present day, all of David SweetLow’s threads and experiences are woven together in {Up_ Close], an album which, as the title suggests, is an intimate look under the bonnet of someone who’s known success and failure both personally and in his career as a musician. Now in his snug life in Sapporo on the beautiful island of Hokkaido, Japan, he looks not only to the past, but at the present and the future for inspiration, motivation, and above all passion, to continue to write his story of life in the form of music and words. 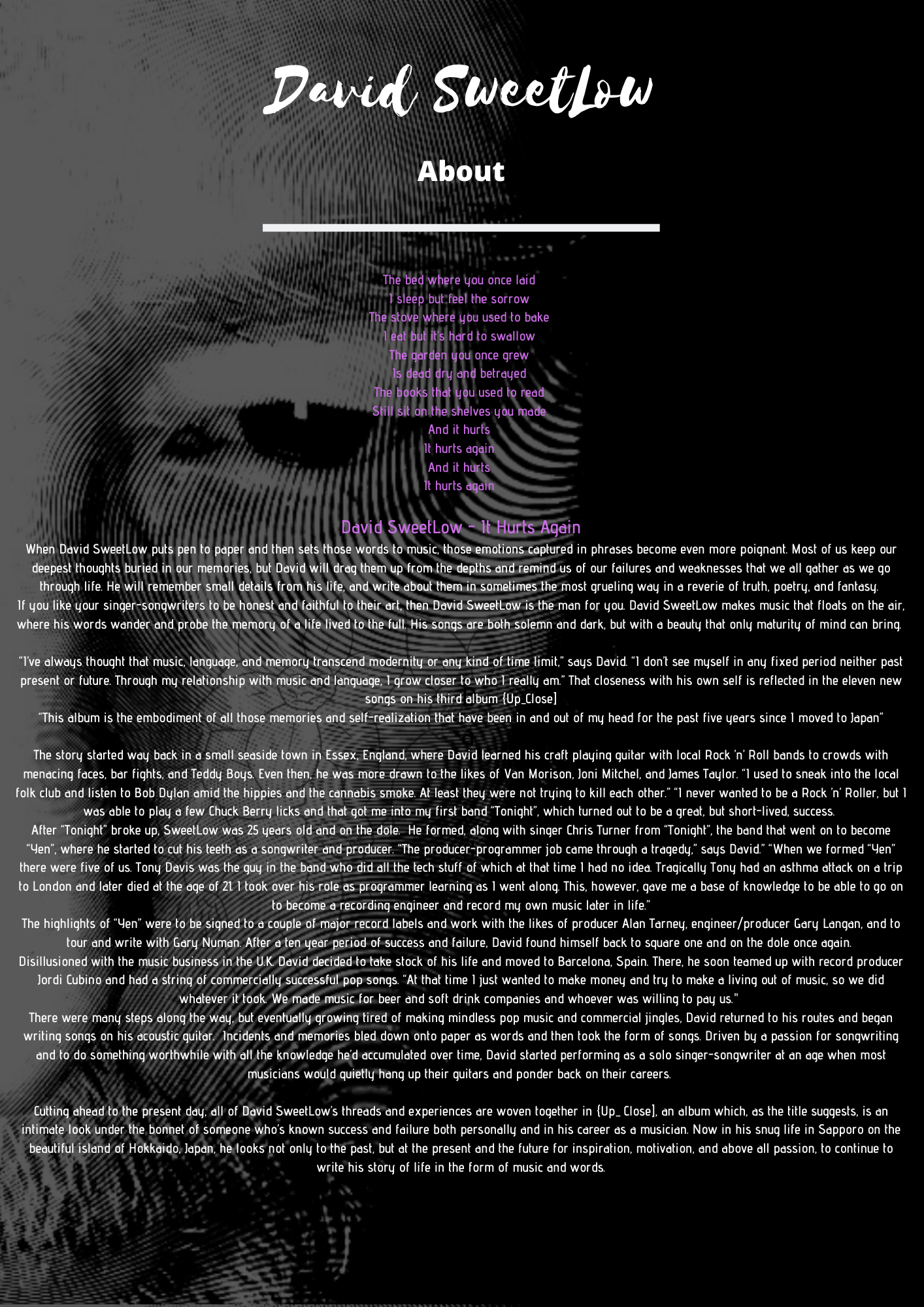 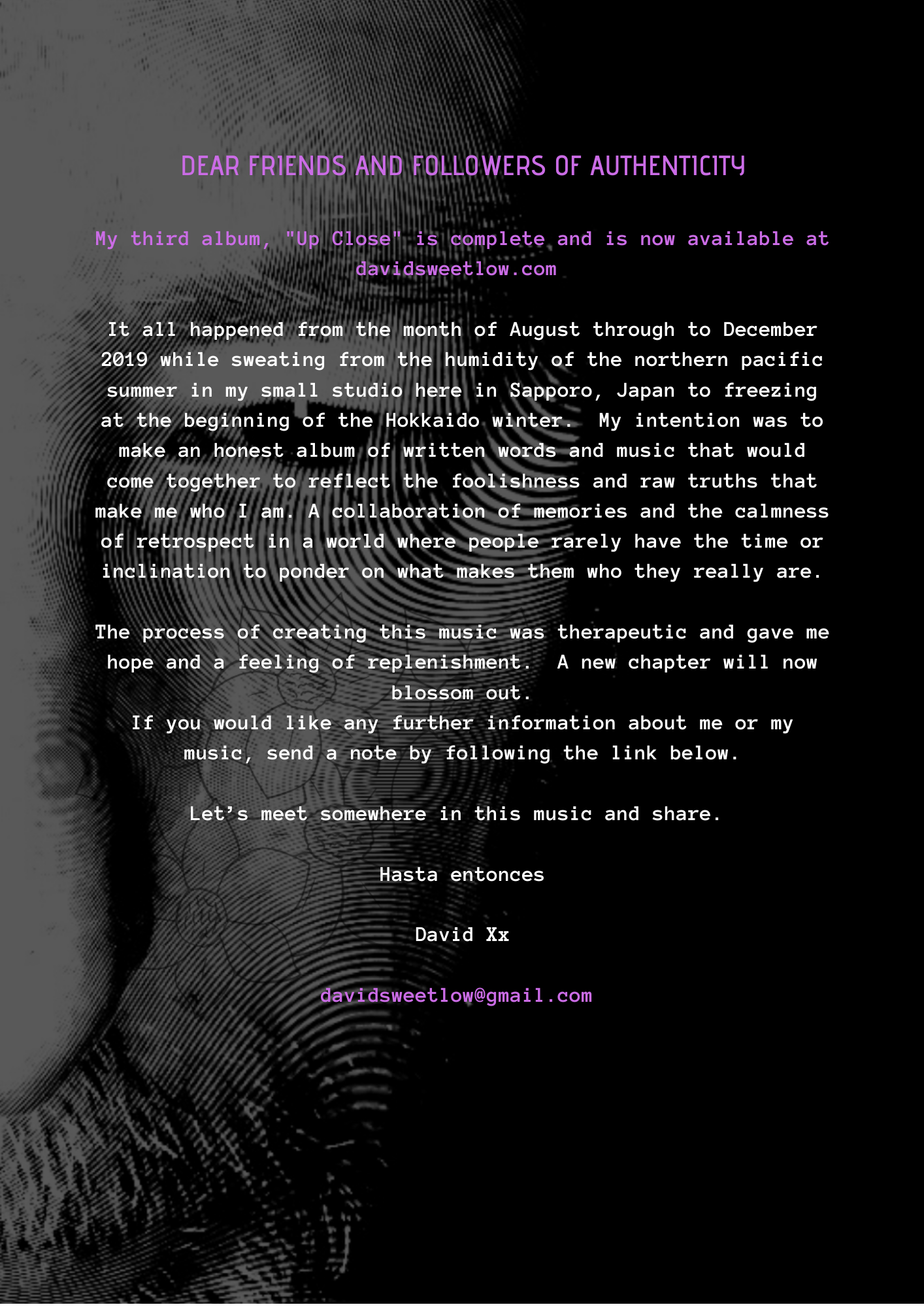 "Up Close” started streaming on Spotify today. Here’s the running order and credits. 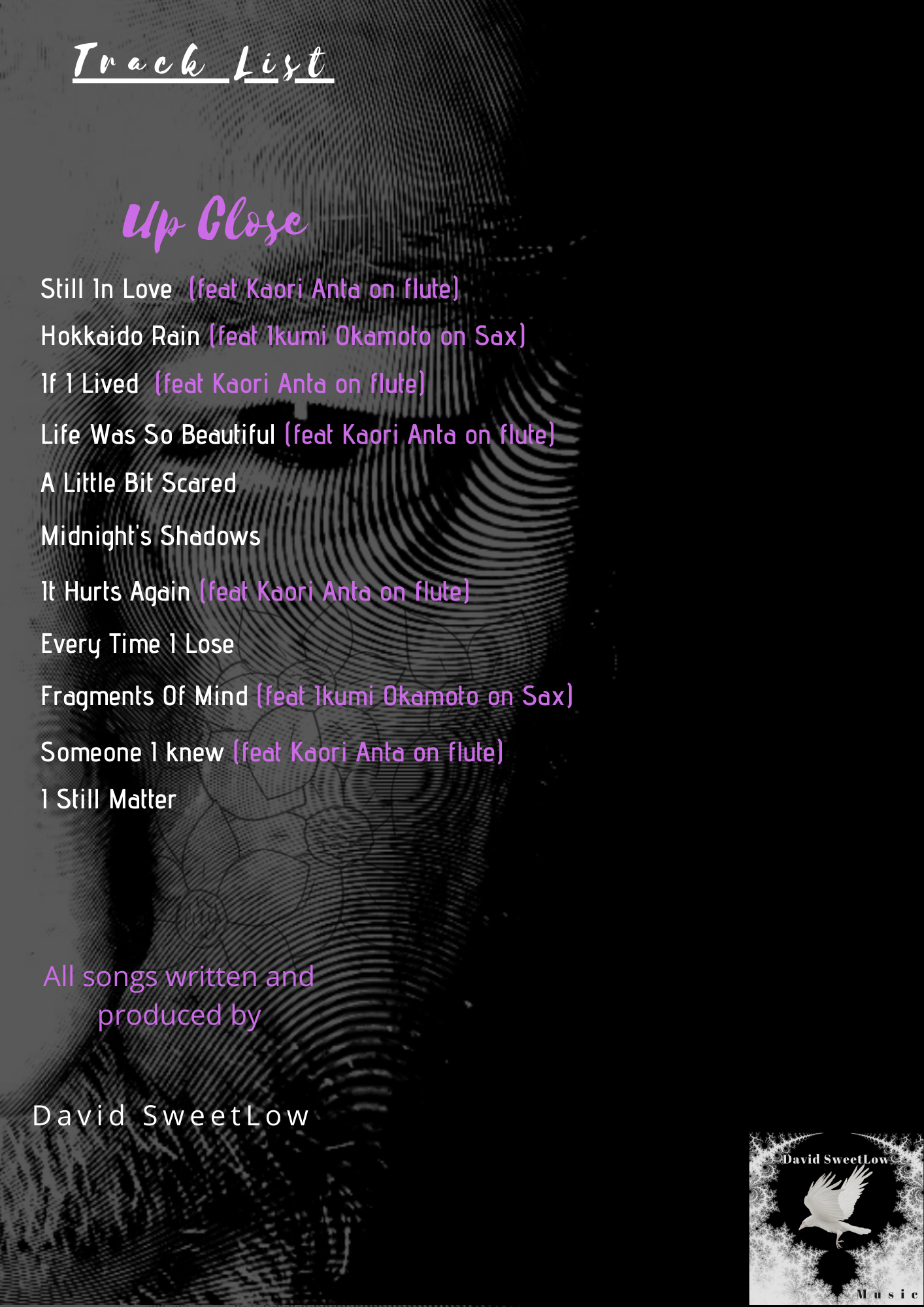 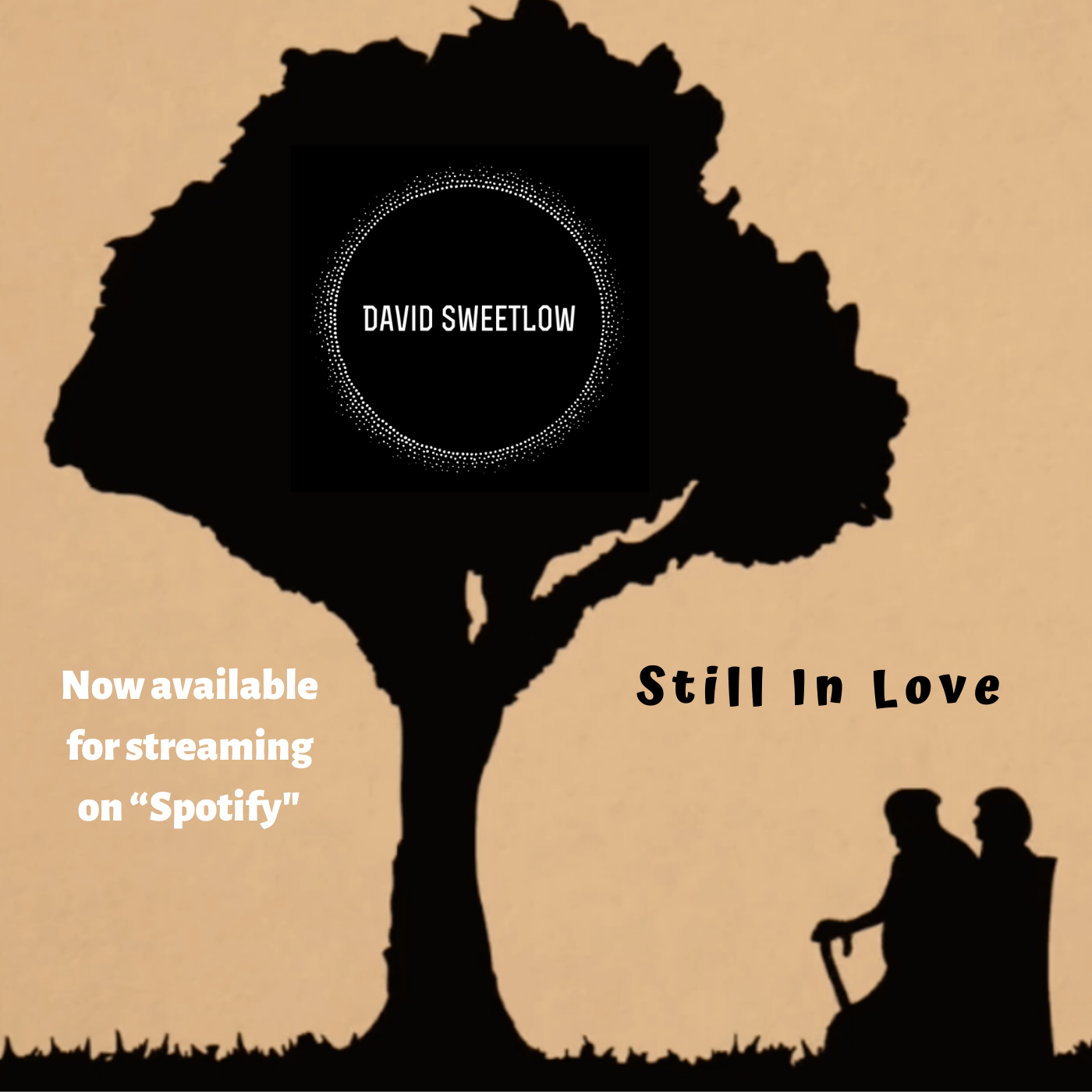 Excited to have uploaded my video Still In Love  this afternoon. I wanted to make a video that reflected the meaning behind the words and music. The gentle enduring love of two people that have spent a harmonious lifetime together despite the precipices in life we all have to face.

A big thanks to all those who came to my gig at the “Freaky Wardrobe Café” in Sapporo on Saturday. I always appreciate your company Xx.

Also special thanks to 大島夕采 and Justin Gambino for their support, great music, and performances.

I just finished the video today for "Hokkaido Rain," one of the tracks on my album [Up Close] which looks really great! I filmed most of the video, apart from the animation, around Sapporo on a rainy night back in October in anticipation to make this video. Looking forward to releasing it soon :)

Update on the progress of my album “[UpClose] release date.

Just waiting to get the artwork back from Madame MA in Germany. Really excited to see what she comes up with! Once the artwork is done it should only take a few days to get the album uploaded to the distributor and then onto the streaming services. I'll be doing quite a lot of promotion work in Sapporo and with a couple of shows in Tokyo. Waiting to confirm the dates.

“The Times We Live In” David N Slater blogspot review

David N Slater, “The Times We Live In” review